Workplace experience for the IT Support Class students

The new W-Block computers has been an exciting success story to watch.

While a lab full of newly built high end graphics/gaming computers may not excite you, the story behind the creation of the W-Block computer lab is certainly a noteworthy achievement.

Half way through last year Christian Lomax, Ben English, Ben Whitley and Karen Achurch considered options regarding the new computer lab. Instead of purchasing pre-built machines, they discussed giving some students the opportunity to build the computers from new parts.

This meeting was the catalyst for Ben English to develop a new course at Trinity Christian School that would offer Year 9-10 students the chance to work towards a Certificate II in Information, Digital Media and Technology. It provided an opportunity for the students to have a real life workplace experience where they could serve the school by offering a range of IT support.

Mr Christian Lomax became their client, who gave the students the brief of what was required for the graphics lab computers. Students researched parts from different shops and decided to create quotes based on MSY Fyshwick as they were a local supplier. A competing company also put together a series of quotes. The quotes went back and forth for a while which in the end resulted in better choices being made regarding parts and specifications.

As MSY were offering competitive prices, the school decided to use them to supply the computer parts. Normally, MSY deal with smaller domestic orders, however, they did really well to put in a special order to cater for our needs. They even came to visit the school a number of times to ensure the build was going well, and they were impressed by the quality of the students’ computer building skills. If we had purchased pre-built machines with the same overall specifications, it would have been more than twice as expensive for the school. 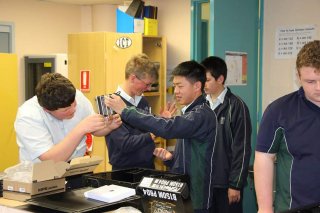 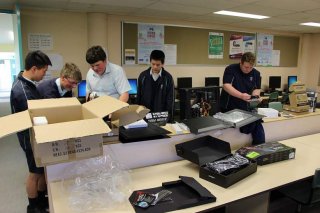 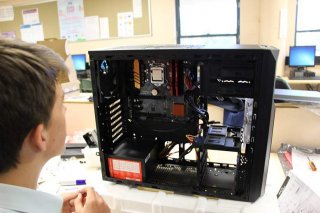 At the end of the year, time was running out to have the computers built as the Year 9 and 10 IT support class had finished school for the year. Students in Year 8 who had chosen the elective for 2017 were brought in early, quickly trained, and were able to help build the remaining computers. They were quite surprised to have Mr English request for their help with this important project, and the joy on their faces was just priceless.

This course has been a real success story for students who have experienced the joy of serving others in a practical way with their skills. This year the student IT support class has increased their partnership with the IT staff by being added to the school’s IT ticketing system. This gives the current class further workplace experience as they deal with real clients, problems, troubleshooting and solutions.

Many thanks go to our students who were involved in this project: Timothy, Samuel, Clayton, Oscar, Jorim, Nathan, Kogal, James and Benjamin.