This year, Year 4 went to Greenhills Conference Centre in Canberra A.C.T. We stayed there for one night and two days. We left on Thursday 9.00am and came back on Friday 2.30pm.

At camp we did four fun activities. My personal favourite would be bushwalking. The activities were bushwalking, damper making, Mission Impossible and Score Orienteering. When we went bushwalking we saw the Cotter River. The view was breathtaking. For damper making we got to cook the damper over the fire by ourselves, but it was very safe. Mission Impossible, we had to communicate and problem solve. For Score Orienteering we had to find markers and write them down in order.

The food they served was delicious! For lunch we had sandwiches but there was NO Butter. Luckily there was butter at dinner. For dinner we had pasta, it was not as delicious as lunch and breakfast but it was ok.

We also got to sleep in cabins with our friends and had a time to have a shower and freetime. After dinner we played a fun game called Shrek Billionaire and sang some fun songs. Lights out was at 9pm but in the middle of the night everyone in my cabin heard creepy noises so we didn’t get to sleep until 10.30 or 11.30pm.

The next morning we packed up our clothes and toiletries. Then we had breakfast. For breakfast we had hash browns, spaghetti, toast, bacon and scrambled eggs. It was the most tasty delicious meal we had at camp. Then we did some Christian studies. I even remember and learnt a Bible verse. “For the Son of Man came to seek and to save what was lost” Luke 19:10

Overall camp was really fun and I enjoyed it. Oh and the cabins were really clean. I would probably go there again and recommend it to anyone who wants to go camping.

Year 4 camp is held at Greenhills Conference Centre – Canberra. We left on Thursday at 9.00 and came back on Friday at 2.30. Many people have been nervous but once they get there they have loads of fun. I was very nervous too but when I got there I did not want to leave! Even better all the leaders were Christian!

There were four activities. They are bushwalking, cooking damper, Mission Impossible and Score Orienteering. The Year 4 teachers put you into four groups, so you rotated and got to do them all.
You ate all your meals in the dining room. They let the people with ‘special diets’ go first. Then they let the others go table by table. They gave you a good amount of time to eat so you don’t have to hurry.

The teachers chose your cabins but they tried very hard to put you with at least one of your friends. We got about one hour of free time, (that is also when you can have a shower). Since they are all Christians we spent time singing praises to God and spent time looking at His word and memorising it. Before bed we played some games and had fun. When we were winding down we went into small groups and said a bit about us and our day. Trust me, Year 4 camp is lots of fun! 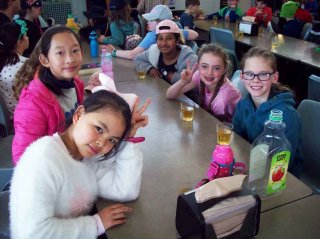